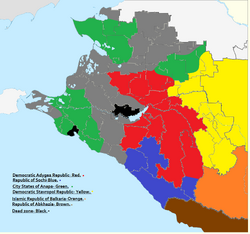 It was bad in the 1962-64 weather break down and many people died as a result of it. The mountain ice and permafrost was badly affected and swamps began to freeze, then grow as an ice lake, thaw, swell into a water lake, dry up, re-fill, freeze over and return to normalcy, but all out of sync' with nature's rhythm. A minor cholera outbreak and famine hit the yet to be nation in 1963 and 1964, killing a few more people.

The Caucasus Mountain States have several bilateral treaties, of a close nature with each other. They were once part of the South Caucasian Federation (1965-1991), but it dissolved in 1991. The 1996 Treaty of Beslan brought both a free trade deal and an uneasy peace to the region.

Thyroid and lung cancer is still a major problem, but became much lower since 1979.

Retrieved from "https://implausablealternatehistory.fandom.com/wiki/Democratic_Stavropol_Republic_(1962:_The_Apocalypse)?oldid=62028"
Community content is available under CC-BY-SA unless otherwise noted.